Show your support this Movember 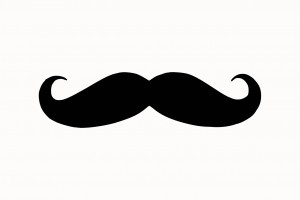 In November men around the world let their moustaches grow out in aid of an initiative called ‘Movember’. Starting back in 2003 in Melbourne, Australia with just 30 men taking part, Movember now involves over four million participants across the globe.

The aim of Movember is to raise both awareness and funding to health issues affecting men, including prostate and testicular cancer. The end goal is quite simply to “change the face of men’s health” and since the initiative began, over £356 million has been raised worldwide for various men’s health initiatives.

In the past Movember has focused on physical health issues such as testicular cancer, but now many more are raising money for mental health initiatives. The idea behind Movember aside from raising awareness is to encourage men to talk about their health more.

So, what can us girls do to show our support during Movember? As well as sponsoring friends/relatives/boyfriends to grow a ‘tasche, you could have some fun with the theme and incorporate it into your beauty routine (and no, we’re not suggesting you glue an honorary moustache to your face). We’re talking about nail art! Take a look at the following ‘tasche nail art tutorial from Cosmopolitan:

Start by filing your nails into the desired shape and pushing your cuticles back. Then apply a basecoat followed by a neutral colour (we like pale pink).

Using a dotting tool and some black nail varnish, make two large-ish dots in the center of your nails, towards the tip.

Using the smaller end of the dotter tool (or the end of a toothpick) add two more smaller dots either side of the bigger dots.

With a striper brush, draw two arched lines from the larger dots to the smaller ones, creating the mustache’s handles. Fill in the lines and voila! You have a teeny tiny mustache. Repeat on as many fingers as you like.

Once the design has dried, add a clear topcoat to protect and prolong your handy work.

If you would rather leave your nails to the professionals, you can find a nail technician using our advanced search.

Other articles by Katherine

What are your nails telling you about your health?
By Katherine
Many of us see our nails as nothing more than a blank canvas for colours and designs, but...
Nails Nail Extensions & Nail Overlays Manicures

Hacks to stop your nail varnish chipping
By Katherine
Many of us blame our quickly chipping manicure to bad nail polish formulas, but could the...
Nails Nail Extensions & Nail Overlays Manicures

The invisinail trend
By Katherine
Nail colour and nail art will never go out of style, but recently the beauty world has...
Get updates