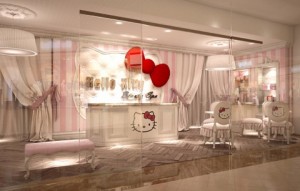 Dubai is a city famed for it’s ambition, and has in recent years become a well-oiled machine which seems to churn out the best, first and most extravagant of everything.

The tallest man made structure, the tallest hotel, the first seven star hotel, the world’s biggest mall (complete with indoor ski slope & real snow) – you name it – they’ve done it – and they’ve probably done it better than us. So, their latest venture may or may not come as a surprise to you…

Dubai are the first country to launch a Hello Kitty Beauty Spa – where super fans of this insanely popular moggy can be pampered head to toe in bright pink kitty cat themed treatment rooms. 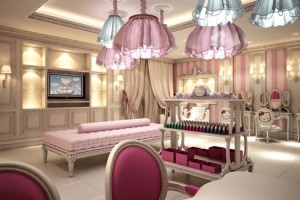 The spa is located in Dubai’s Town Centre Jumeirah and was designed by a Tokyo-based artist, Miyuki Okamura. The salon itself has been designed to resemble a Parisian boudoir, and offers quirky treatments such as ‘kitty-cures’ aimed at both mums and their youngens alike (referred to as ‘Queens’ and ‘Princesses’ in the Hello Kitty Spa).

The themed spa also has a ‘Kitty Cafe’, which sells Hello Kitty cupcakes as well as a range of other treats and snacks.

So it would seem that Hello Kitty really is the cat that got the cream, and will long continue in her quest to take over the world. So after a spa what could possibly be next on the agenda? A restaurant, a theme park, a maternity ward, an airline? Surely not…oh no wait! They have all already happened. Next stop world domination then. Meow.