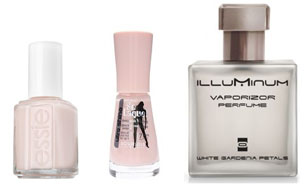 Last Friday the world went Royal Wedding mad with 34.7 million people in the UK alone watching some of the BBC’s coverage of Kate and Wills tying the knot.

Of the millions who were watching I’m sure there were a fair few contemplating the design and designer of Middleton’s dress, how she would wear her hair and what make up she was wearing.

Thankfully Kate did not stray too far from her normal look and despite probably having make-up artists queuing all the way to the moon for a chance to do her make-up, the now duchess refreshingly decided she would feel more comfortable doing it herself.

Kate kept things fairly simple in the make-up stakes, going for glowing skin with a little more blusher than usual, a soft smokey eye with her signature eyeliner and neutral lips and nails.

Though the products used remain mostly unknown, the Daily Mail revealed that according to Kate’s nail stylist Marina Sandoval from Jo Hansfords London salon, she was wearing a special blend of Bourjois No 28 Rose Lounge and Essie 423 Allure.

In addition, Clarence House revealed that Kate was wearing a fragrance she had requested a few weeks before – White Gardenia Petals, by the little known The House of Illuminum, founded by British perfumer Michael Boadi. Of course, Kates midas touch now means the £70 fragrance has sold out, but if you want to smell like a princess then you can join the waiting list on the official website.

BR beauty tips
By Ellen Hoggard
1. Exfoliate before applying your face mask. It will help the ingredients penetrate...
Eyes and Brows

The best eye makeup for your eye shape
By Ellen Hoggard
It can be difficult to tailor your makeup to your face or eye shape when you’re not...
Nails Nail Extensions & Nail Overlays

What are your nails telling you about your health?
By Katherine
Many of us see our nails as nothing more than a blank canvas for colours and designs, but...
Get updates