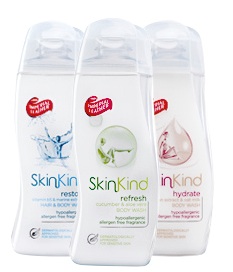 For a very long time there has been a big old gaping hole in the beauty market with regards to fragranced products for sensitive skin, leaving many of the more sensitive souls limited to oderless boring fragrance free shower gels and bubble baths.

Well praise the heavens, as Imperial Leather has launched a gorgeous new bath and shower range which they have aptly named SkinKind. After conducting detailed consumer research, the brains at Imperial Leather found that people with sensitive skin highlighted the lack of fragranced products available to them and so the idea of Skinkind was born.

SkinKind aims to give sensitive skin a luxurious treat, developed in conjunction with its own in house fragrance experts, this range is designed to spice up bath time for those who previously had to fret over the ingredients of their products.

Upon finding out a couple of the products were being sent this way, the bath was already running in anticipation! We received the hydrate bath milk with cotton extract and oat milk and refresh, a light hair and body wash with cucumber and aloe vera (which was actually developed for men).

We tried out both products together in a double whammy and were extremely pleased with the results. The bath milk produced a glorious amount of bubbles which lasted a good few chapters of our favourite book/until the water went cold, the smell was also lovely and again lasted the duration of the bath and upon giving myself a rub down left the skin feeling soft and not tight.

We also tried out the cucumber and aloe vera body and hair wash and despite it being aimed at a male audience we sampled it in the name of beauty. The fragrance was extremely refreshing and again the formulation did not strip the skin and instead left it moisturised all day long.

The SkinKind range starts at £1.80 and is available at all good supermarkets.